In Nanexa’s drug delivery system, PharmaShell®, drug particles are enclosed in a shell with controlled solubility, which means that it takes a certain amount of time to dissolve the shell and thereby release the drug into the body.

Through the ability to control the thickness of the shell with high precision, the rate of release of the drug can be accurately determined in advance. With this it is possible to create drugs for parenteral administration that last for weeks or months. 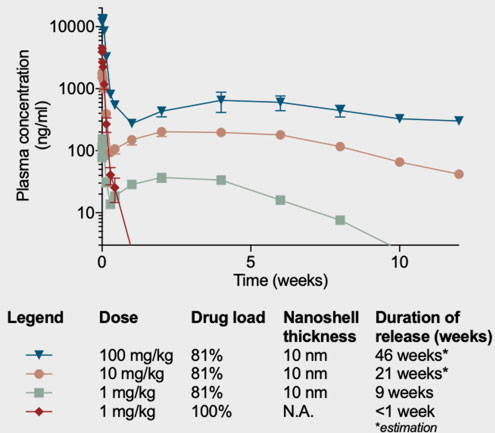 ALD – The coating technology behind the drug delivery system PharmaShell®

The technology used by Nanexa to manufacture the shells that make up PharmaShell® is Atomic Layer Deposition (ALD). In ALD, reactive gases are used which, with atomic layer by atomic layer, build up a surface coating with high precision. ALD has been used in the electronics industry for decades and is thus well established for larger scale production and automation.

ALD can also be used at low temperatures, down to room temperature, unlike other surface coating techniques which usually use considerably higher deposition temperatures, thereby risking inactivating the drug. A further advantage of ALD is that the coating is carried out under dry conditions, which makes it possible to coat drugs that are quickly dissolved in water or other solvents.

By building up an atomic layer for atomic layer with ALD, the thickness of the coating can be controlled with extremely high precision. Drug particles of various sizes and shapes can be coated since the only thing required for coating to be formed is that the reaction gases can reach the surface.

We use cookies on our website to give you the most relevant experience by remembering your preferences and repeat visits. By clicking “Accept All”, you consent to the use of ALL the cookies. However, you may visit "Cookie Settings" to provide a controlled consent.
Cookie SettingsAccept All
Manage consent

This website uses cookies to improve your experience while you navigate through the website. Out of these, the cookies that are categorized as necessary are stored on your browser as they are essential for the working of basic functionalities of the website. We also use third-party cookies that help us analyze and understand how you use this website. These cookies will be stored in your browser only with your consent. You also have the option to opt-out of these cookies. But opting out of some of these cookies may affect your browsing experience.
SAVE & ACCEPT
Powered by